These slow cooker recipes are as old as time itself, that take little work and even less attention as they infuse food with a goodness that only time can give. And all that is required is that we slow down.

Slow cooking simmers gently in a flavorful broth while we run errands, go to work or just do some fun stuff.  And while we are occupied elsewhere, our meal is being transformed and flavors are blending.

The advantages of these slow cook recipes is you can simmer dinner for hours without worrying about overcooking it.  A slow cooker turns tough meat into succulent, melt in your mouth feasts.

Though slow cooking is easy, be careful it do take some effort.  So get to know your cooker's strengths and limitations so you can be more artful in your efforts.

My cooker is not programmable, it is a three in one pot set, with a 2-quart, a 4-quart and a 6-quart stoneware and one glass lid and that fits all three, with a temperature control and stoneware size buttons and an electric base.

The settings are high, low, warm and off but that does not stop me from making flavorful and tasty recipes. First lets look at slow cookers features:

Generally all operate the same. The differences between programmable and non-programmable ones are more often between models than between brands.

Things To Consider Are:

Some models have a warm settings which is about 165 F. All these controls are very important in choosing your slow cooker recipes.

These models do not keep track of time. Once you turn them on and set at one setting, they stay there until they are manually turned off or switched to another setting.

Now some of the new brands of programmable slow cookers, sold by Amazon, allows you to set the timing by half-hour or minute increments - from 1 minute to 20 hours. After the set time, they will switch to warm, but cannot be switch from high to low or switched off automatically.


The programmable slow cooker models tend to cost more than the non- programmable models.  So when choosing your slow cooker recipes you must consider the size of the pots. They range from one to eight quarts, though most are between three to six quarts.

Next slow cookers are round and the large ones are usually oval.

Things to consider about the shape is are you planing to do some baking. To accommodate a medium size banking pan the interior has to be at least 7 inches wide.

With this modification you can slow cook cheesecakes, fruitcakes, pudding cakes, crisps and steamed puddings. However, for the best results stick with moist, dense cakes. This type of cooking cannot bake a buttery crumb or an aerated texture cake.

The cooker must be covered to regulate the temperature directly around the baking dish.

Last, in choosing your slow cooker is appearance. You can purchase one in a color that coordinated to your kitchen, decorated with country motif, clad in stainless steel, or emblazoned with NASCAR collage.

Most devotees, and I am one, are motivated more by the machine's ability to cook untended all day.  So I am listing slow cooker recipes that are as good as anything you could cook with a traditional cooking method and are heart-healthy.

I highly recommend these slow cooker recipes and cookbooks for you to review and purchase.

When making soups do not use bouillon cubes, instead make your own stock. It is simple and easy like most slow cooker recipes. Just place all ingredients in the cooker for four hours.  Then strain and allow to cool, then store in a container and refrigerate or freeze and use when required.

Add 1 1/2 to 2 liters/quarts of water bring to a boil and simmer for about two hours if cooking in a traditional pot or approximately four hours in a slow cooker. 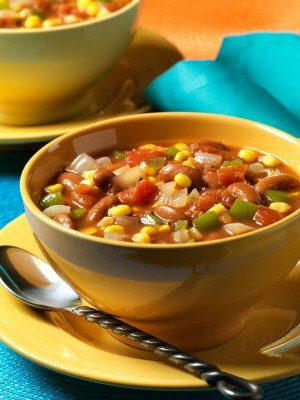 Vegetable soups, from my slow cooker recipes, yields the aromas and nutrients of the vegetable into the broth gradually. The benefit of cooking this way is that your meal can be ready in three hours or as long as ten hours.  That's what makes it perfect for any schedule.


Add vegetable stock, chickpeas, vegetable juice, diced tomatoes, vinegar and pepper to 5 to 6-quart cooker. Remember when cooking these slow cooker recipes, cover and cook for 3 to 5 hours on high, or 6 to 10 hours on low.

Note: For best flavor from these slow cooker recipes, prepare a day or two ahead or cook overnight, refrigerate until dinner time and reheat on the stove top. 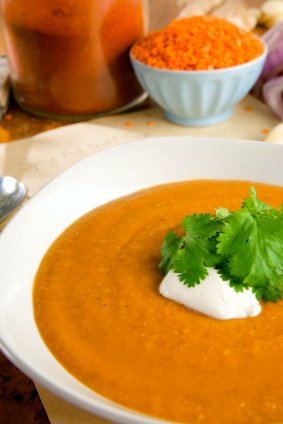 Take a deep breath and smell the cumin, the coriander and cinnamon. Then take a look at the colors of burnt-orange flow of turmeric burnished with tomatoes and sweet paprika. You are going to love this soup.


Place all ingredients except pepper flakes, lemon juice, parsley and cilantro, in a 6-quart cooker and cook for 4 to 5 hours on high, or 8 to 10 hours on low.

Stir in and cook on high for 10 minutes pepper flakes, lemon juice, parsley and cilantro.

Note:  If you would like to add meat to your soup, add 1 pound boneless, skinless dark chicken meat or leg of lamb. Before adding meat to slow cooker, heat olive oil in a large skillet over medium-high heat, saute onion, your choice of meat cut into 1/2-inch pieces and browned.

Then add to cooker and proceed with cooking instructions.

Cacciatore means 'hunter' in Italian and in ancient times was usually made from game meat that was stewed and very nourishing. Cacciatore has an abundance of delicious gravy, so serve it with noodles, rice or lots of bread to soak up the juice.

For this slow cooker recipe we use dark meat instead of white meat. Skinless chicken thighs still on the bone is excellent for maximum flavor and succulence. Great substitutes are turkey thighs or wings or cut-up rabbit meat.

Heat oil in large skillet over medium to high heat. Brown chicken, about 3 minutes on each side. Then transfer browned chicken to 6-quart cooker.

Saute onion, garlic, oregano, rosemary and mushrooms in skillet until tender. Add the reserved seasoned flour and stir until the vegetables are coated. Pour in vegetable broth and tomatoes and heat until thickened.

Keep stirring, scraping up any browned bits clinging to the bottom of skillet and then pour into cooker. Cover and cook for 3 to 4 hours on high, or 5 to 8 hours on low, until meat is easily pierced with a fork.

Remove chicken from cooker to a platter.

Stir in anchovies and parsley into the sauce and simmer for another 5 minutes. Spoon sauce over chicken and serve.