Foods High In Cholesterol:
Should You Avoid Certain Foods?

Eating foods high in cholesterol should be important to you if you are concerned about your cholesterol levels.  Improving your diet is one way to lower your overall cholesterol.  While total cholesterol content is not the only factor that determines whether a food is heart-healthy, it is certainly important. So be careful with these high cholesterol foods and watch your cholesterol numbers improve. 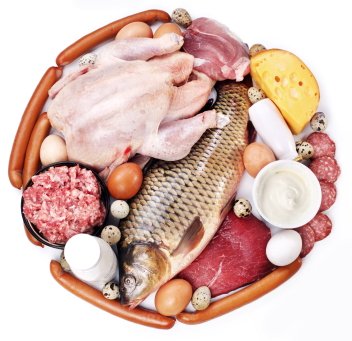 Yes, I'll be listing delicious foods that are high in fat, saturated fat, or cholesterol but that doesn't mean that they are totally gone from your table.  It just means you have to exercise portion control.  You just cannot have butter morning, noon and night.

Butter is pure butterfat, the natural fat in milk and the only redeeming fact of butter, other that its delicious salty flavor, is the fact that it is a concentrated form of energy.

Pork, a lean piece has around 9 gram of fat with 3 grams saturated.  With the worst part being the pork belly with an inconceivable high amount of cholesterol.  But tell me if this is not a very tasty piece of meat.  Can you imagine eating a piece of jerk pork or barbecue spare ribs.  The fat contained in the meat gives it the most satisfying taste and flavor.

Lamb - which is the highest meat with the highest portion of saturated fat per ounce.  A 4-ounce serving of lamb has 23 grams of fat and 9.9 of them saturated.  I happen to love lamb, it is a very juicy and delicious piece of meat.

Eggs are another confusing factor and have high cholesterol animal product.  Just one egg contains over 70 percent of the recommended daily cholesterol intake.  Nutritionist has long stated that eating eggs raised your risk of heart disease.  But new studies have indicated that there is no significant difference in risk between those who eat an average of one egg daily versus those who eat less than one egg a week.

The yolk from one large egg contains 213 to 220 mg of cholesterol, about 50 to 60 mg less than originally believed.

Before you dismiss eggs entirely from your diet, you should know that eggs have many benefits, so long as its eaten in moderation.  Eggs are high in vitamins A, D, E, every B vitamin and several essential minerals.  Some of these work to lower the LDL levels in your blood.

Further, the protein found in eggs is the most complete found in common foods.  That means eggs most closely mimic the amino acid profile most beneficial to your body.

Shellfish lovers you will want to skip this paragraph, and  I am a shellfish lover. I love and eat everyone of these.

Studies states that even when steamed, all shellfish, including shrimp clams, mussels, oysters, lobster, crawfish and octopus are high in cholesterol.  The individuals who did this study could not have eaten a good dish of seafood gumbo or they would not have written this report.

They even state that the cholesterol numbers go up even higher when factoring in some common, butter-heavy preparation.  I am getting hunger.

Oysters are listed as one of the worst, containing over three percent of your daily recommended intake of cholesterol.  That sounds reasonable, but consider that an oyster contains only about a quarter ounce of meat and that a servicing will typically be over a half dozen.  I am sure they could not have tasted or eaten a delicious raw oyster with a mixture of some tobassco sauce, horseradish and some soy sauce - it is so good.

Unfortunately, foods high in cholesterol are ranked high among people's favorites, but they do not need to be eliminated altogether to see an improvement in your heart health.

Eat these foods high in cholesterol only at special occasions, enjoy the benefits of lower cholesterol levels and decrease your risk of heart disease and high cholesterol.